Its October!!! which only means one thing… Halloween party planning!

And to make sure you don’t miss a trick (or treat!) we’ve put together this handy Halloween party list to help you get your spooky celebrations underway.

Below we have a few ideas to help get your creative juices flowing, we can supply any one of these ideas for you.

No party is compete without sweets, and if your child’s party is near Halloween and you’re making it a Halloween party, these are the perfect alternative to party bags and everyone will love the sweet cart for your guests to dip in and out of throughout your party.

These make amazing centre pieces for your Halloween party tables and are a real talking point. We created some amazing ones last year, which featured a pumpkin, an eyeball and a spider’s web!

We can create an amazing Balloon frame or wall for your guests to have pictures with.

We can do any of them! Helium, air, foil, balloon arches and personalised ones! Let us know and we can create your vision.

Perfect for Halloween parties. Who doesn’t love glitter? Choose from all the traditional Halloween shapes.

If you want to call us and discuss your party needs, we are happy to do this, we’ve got some great ideas on how your party can be the talk of the town.

Whatever your plans are this Halloween, make sure you have all the balloons and decorations you need to set a spooky scene; whether it’s scary balloon designs for an event, witch shaped balloons or assorted spooky sweets to give away to trick or treaters!

Gone are the days of just balloons and a Victoria sponge. If your baby is having a 1st birthday, there’s only one way to celebrate: with a cake smash!!

Turning one is an important milestone, a very proud moment for parents and family.

A photo session to mark this occasion is a really valuable investment, after all, your child will never turn one again! Cake smashes are messy, fun and a perfect way to capture that cheeky and innocent personality.

Here are 4 top tips to think about when planning your childs cake smash.

2. CHOOSING YOUR CAKE – your cake doesn’t have to cost a fortune! It’s a great idea to approach a professional cake maker, ask your photographer who they recommend. Remember the brighter the colours of the cake the better!

3. PROPS – Spatula’s, bath tubs, different outfits, favorite teddy bears and cake stands, all of these things can add to a cake smash shoot and make it look super amazing!

4. TIME – Choose a time in the day when you child is happiest. Ideally not straight after a nap or right before. We also want your child to be interested and hungry for CAKE! Timing is very important so think about when is most suitable.

With thanks to BAPIA, for the 4th year running, we volunteered our time and expertise to help Great Ormond Street Children’s Hospital with balloons and decorations at their special Christmas parties for children being cared for by the Hospital. The four parties were spread over two days with around 500 guests, giving children and their families time away from the hospital wards to enjoy having fun together.

The parties were the first in the series of ‘12 Days of GOSH Xmas’, where from the 14th to 25th of December Great Ormond Street Hospital featured some of the best festive moments taking place at the hospital throughout the Christmas period.

The children enjoyed fun activities such as face painting, arts & crafts, biscuit making and posing for pictures in a giant snow globe. There was an enchanting performance from the cast of Wicked, and a wonderful appearance from a choir put together by The Old Vic to get everyone into the festive spirit. Christmas would not be Christmas without Santa and he did not disappoint, surprising the children and spreading Christmas joy to all the families involved.

The families were also joined by an array of celebrity friends including Emma Bunton, Stephen Mulhern, Nick Grimshaw and Dan Beasley-Harling from this year’s Great British Bake off. 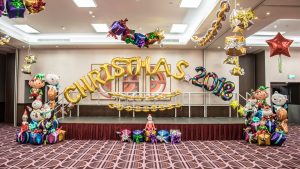 We, along with 20 other balloon professionals, spent the day with GOSH creating arches and a spectacle of other balloons including festive chains, baubles, presents, a helicopter and an aeroplane. The show stopper was the beautifully designed stage area filled with letter balloons spelling out ‘Happy Christmas’ for all of the children to enjoy.

The balloons were all latex-free due to allergy concerns for some of the children at the hospital, and the décor was made to last as it was being used for four separate parties over two days.

For help with your next event contact Helen on info@creativedecorations.co.uk

Are you tired of seeing the same faces on New Year’s Eve? Do you want to see new sites, new environments and meet new people? From fireworks shooting across stunning backdrops to crazy street parties in cool capitals and all-night raves on warm beaches, there’s no shortage of amazing ways to ring in 2019. So, start the year as you mean to go on! You could wake up on the 1st of January in a brand-new city after a night (and maybe morning!) of celebrations! Here’s our top 8 places to spend New Year!

London is a fabulous place at the turn of the year. At midnight on New Year’s Eve, London’s night skies will be a blaze of light and colour with a display of stunning pyrotechnics from the river on London’s famous South Bank. Get your family and friends together and say cheers to 2019! 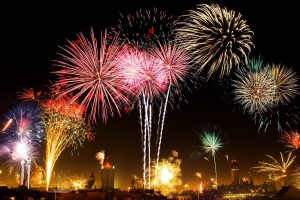 New Year’s Eve is primarily a street festival in the Roman city centre. Many Romans eat at home or in the restaurant and at midnight they flock to the city centre, to the Coliseum or to the vantage hills to celebrate and watch the fireworks. Even the nightclubs turn up on New Year’s Eve, to celebrate the new year.

An iconic Times Square New Year’s Eve celebration is not only a New York tradition, it’s a global phenomenon. An estimate of one million revellers will flock to the land of LED screens to witness one of the best NYC events in December, which includes star-studded New Year’s Eve concerts, the inevitable surprise engagement and a chance to be featured on live television.

The Scottish capital’s famed three-day Hogmanay extravaganza kicks off on 30 December, with a Viking-style torchlight procession along the Royal Mile. The big night itself includes Franz Ferdinand headlining Concert in the Gardens, which wraps in time for gig-goers to catch unequalled views of midnight fireworks over Edinburgh Castle. An adjoining street party dance on into 2019. Celebrations continue on New Year’s Day with live music and the traditional fancy-dress dip in the freezing Firth of Forth (known as ‘the Loony Dook’).

Sydney Harbour’s firework extravaganza is watched by more than a million people gathered along the foreshore – but a better idea is to join the boatfuls of people bobbing in the water. You can hire out a boat, bring your own bubbles and start the countdown early. You might prefer to reserve an outside table at one of the waterfront restaurants by Sydney Harbour Bridge for a front-row seat, but ensure you book early!

New Year’s Eve has its very own name in Poland called “Sylwesters”. Head to Kralow for a celebration like no other as this city has a reputation for hosting one of Europe’s biggest open-air parties. Rynek Glowny, Krakow’s beautiful medieval square, has a huge light and laser show with live pop acts to dance along to. People gather at the free celebrations both in the square and around the city to wait for the clock to strike.

If you’re looking for a city break closer to home, Dublin’s a great option and the Irish sure do know how to party! There’s the iconic Temple Bar, which is a must-visit for anyone’s first time in the city. It’s especially magical on New Year’s Eve, where you’ll find the celebrations spilling out of the pub and into the lively city streets. You could also choose to catch the Liffey Lights Midnight Moment, a light and laser show timed perfectly against DJ tunes that really get the party started. As one of the ‘friendliest cities in the world’, Dublin’s locals are always there to make sure you have a great time too. With quirky performances, dancing in the street and sharing a pint of Guinness with strangers-turned-friends; it’s all waiting for you this New Year’s Eve! 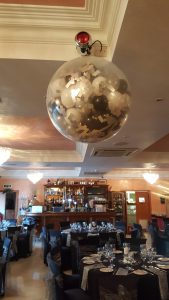 When it comes to New Year holiday destinations, nothing quite compares to hitting the streets of Barcelona. The Catalans sure know how to party, and from super clubs to avenues, the celebrations continue early into the morning. Greet January in a traditional way on Plaça d’Espanya, where you’ll find a stunning light show filled with music and special effects. All the excitement is centred around the Magic Fountain.

If you are partying at home here in the UK, don’t forget us! We provide wonderful celebration balloons for your New Year’s Eve party, our most popular being our ‘pop’ balloon with confetti creating a magical moment for when the clock strikes 12!

With Halloween quickly approaching you’re probably looking for a few scary party ideas that’ll really help things get spooky. Creative Decorations can help! Halloween is the perfect time to really let your creative juices flow. If you have already got your scary Halloween outfit organised, chosen the spooky nail art you’re going to have and picked out the recipes you’re going to bake for the big day, then there’s only one thing left to do; organise your Halloween Party! Here are a few good ideas for some scary activities you can plan for your upcoming Halloween party.

1.Grab the Ouija Board!

Back when you were younger, there’s a good chance that you were curious about the Ouija board, especially because your parents were usually against it! This is a fun party game that can easily get a little bit spooky, depending on the crowd you invite over (or the spirits that are hanging out in your house).

You don’t need to illuminate your face with a flashlight, but you can still make your stories spooky. A good place to look is on the internet. Most of them are fictional and some are so ghoulishly good that you’ll be up all night!

There are so many recipes out there. Have a look on the internet for tips and keep it simple! Biscuit ghosts, grape eyeballs, blood punch and spider pop cakes are all fun and easy to make.

One of my favourite parts of Halloween are the scary films! With so many to pick from, why not have a scary movie marathon. Psycho, Halloween, Scream, Paranormal Activity and The Shining are some of my favourites to get your hearts racing!

This might be seen as another children’s game, but you know what? Hide and seek can get kind of creepy. Especially if you’ve got a lot of decent places in your home to hide. Make the house pitch dark and let someone try to find the rest of the gang.

Grab a murder mystery game, there are loads available for you to play at home and available for all party sizes. Get everyone to dress up and your friends will be talking about your party for years to come.

Creative Decorations can supply the following for your party:

Make your house spooky with our balloon arches for selfies/front of house or mini witches!

Of any kind, in cones or cups! Give your guests a fright with our frightfully tasty sweet hands!